Early this morning, Olly Hicks and George Bullard completed the world’s first documented crossing by kayak from Greenland to Scotland including navigating ‘The Devil’s Dancefloor – the notoriously hazardous ocean between Greenland and The Faroe Islands.

Peak Dynamics are proud to have supported Olly and George in the build up to the expedition and during it.

Earlier this summer, British explorers Olly Hicks (@ollyhicks) and George Bullard (@george_bullard) set out to attempt the world’s first documented crossing from Greenland to Scotland by kayak. The expedition covered over 1,200 miles at sea, taking the team over two months to complete having left the UK. Olly and George arrived today at Balnakeil Bay, Cape Wrath, Near Durness in Scotland having undertaken a hazardous journey from the shores of Eastern Greenland to the northern Scottish Isles.

Hicks and Bullard set out at the end of June from Greenland, aiming for their first stop – Iceland, in a slightly modified Inuk Duo 7.4m sea kayak.  The kayak, made of carbon fibre reinforced with Kevlar for ice protection, was equipped with a special cockpit design that can be sealed allowing the paddlers to squeeze inside and safely rest and sleep while at sea.

After three days of crossing the Denmark Strait to Iceland, the duo hopped along the Icelandic coast, sleeping on land at night to allow them to fully rest up before taking on the six-day crossing to the Faroe Islands across the dangerous stretch of ocean known as “the devil’s dancefloor”.

Having left Iceland for their first attempt to reach the Faroes, crossing this notorious stretch of untamed ocean, Hicks and Bullard turned back after 48 hours at sea on this leg, as conditions became too rough and they were unlikely to make landfall safely and in time before the weather deteriorated further. Their grit and resolve with turning back, knowing that they would have to leave again to attempt the same stretch, proved worthwhile and the weather gods granted them safe passage on their second attempt. “The devil let us across in peace on the second attempt - without us having to dance too much! Fingers crossed we're allowed to cross to Scotland similarly unscathed but we will, of course, be pulling out all the stops to make our own luck too” said veteran ocean rower Olly Hicks.

During their frustrating wait in Iceland Hicks and Bullard made sure that there was no chance of boredom, continuing their seaborne training and stepping aboard another vessel to work on an Icelandic Long Liner fishing boat for a week.

Once safely ashore in the Faroe Islands after this notorious crossing, Olly and George spent two weeks waiting for a suitable weather window to enable them to embark on their final leg.  The well-known duo departed from Porkeri, Suduroy, on the Southern island of the Faroe Islands and headed for the tiny island of North Rona. From there, it was another 50 miles to reach their ultimate destination of Balnakeil Bay, Cape Wrath, in Scotland.

“You don’t have to be a special type of person to do this kind of thing, but you do need to be able to continue when the chips are down and everyone tells you it can’t be done,” Hicks says. “Getting in the kayak for the first time is not the biggest challenge. It’s getting back into the same kayak day after day, week after week, with the same wet and soggy kit and often in foul conditions.” Olly Hicks.

On reaching land, having left the UK at the end of June, George Bullard commented: “It has been a hard trip  - wet, long, and very uncomfortable but for a great purpose. It has been very different to all of the other trips which I have been lucky enough to undertake, but we have both been so looking forward to completing this”.

In the late seventeenth century there were some mysterious sightings of strange vessels under sail and oar off the coast of Scotland, and one report of a man who spoke in an unintelligible language making land, only to perish three days later.

To this day, nobody knows for sure who or where these mariners came from. Various theories abound, from fishermen from Finland to indigenous prisoners escaped from ships returning from the New World.  Or as artefacts in Scottish museums point to and the members of the In the Wake of the Finnmen expedition believe, that they were Inuit tribes-people from over 1,000 miles away who crossed some of the world’s most dangerous waters.

“It's incredible to think that these early explorers could cover such a distance, over such inhospitable waters, in such primitive craft,” said Adventurer extraordinaire, Hicks, who has been determined to find out whether this passage could indeed be possible at all. “While we have centuries of technology and learning on our side, this expedition brought with it many challenges – such as the infamous Devil’s Dancefloor – which made for a challenging journey.  “My goal was to shed light on this little-understood mystery and to prove that the trip is possible with the right determination,” Hicks says.

The drama did not stop once they had conquered the Devil’s Dancefloor. During their final crossing from The Faroe Islands to Scotland, the weather closed in on them once more. They had to change their course and seek refuge on the Island of North Rona – the most remote island of the British Isles, population: 0.

Living off the spare supplies they had on the boat (keeping aside enough sustenance for the 50 mile crossing to Scotland) pasta left in a small hut on the island and limpets they found on the rocks. They spent just under a week on the 270-acre island.

The final leg of 50 miles was short in comparison to the previous ocean legs. However, the weather did not make it that way. With a very tight window, they set off determined to get home safely before the storms kicked in.

The Greenland to Scotland Challenge is the first modern day voyage of its kind to complete this route. The pair have covered 1,200 miles of treacherous Arctic waters, paddling all through the night and resting only five minutes per hour. From Iceland they faced the leg’s biggest challenge; crossing the “Devil’s Dancefloor”, an open, 280-mile stretch of water between Iceland and the Faroe Islands renowned for its unpredictability and wild conditions.

The Greenland to Scotland expedition will serve as more than another record attempt. It will also be part of Olly's preparations for a truly epic journey that has occupied his mind since a young age.

“My ultimate goal is to complete one of the last true world-firsts remaining: to circumnavigate the globe, solo, in a rowing boat.”

To do this, Hicks will set out from Tasmania, covering 18,000 miles of some of the world’s most ferocious oceans, including a never-done-before circumnavigation of the Antarctica, before returning to Tasmania, approximately 18 months later.

Bullard, also an accomplished adventurer in his own right, is also world record-breaking explorer and has to date covered more than 2000 miles on foot in the polar regions and completed fourteen global expeditions.

I worked with Olly and George helping prepare them for this journey, assessing their decision-making as well as looking at some of the other key stressors that arise on such arduous trips.

At Peak Dynamics, we use the same assessments and sessions when working with executive teams or companies to help with their culture, decision-making and team behaviour.

I will be working with Olly in the build-up to what will be the biggest challenge of his life - to row around the Antarctic in 18 months starting in 2017.

Earlier this morning on the stunning Balnakeil Bay, Olly and George completed the Greenland to Scotland Challenge. This is the culmination of over two months of paddling and years of planning.  They boys are exhausted but happy. We are all incredibly proud of this brave pair. More to follow but here are some snaps of their arrival. 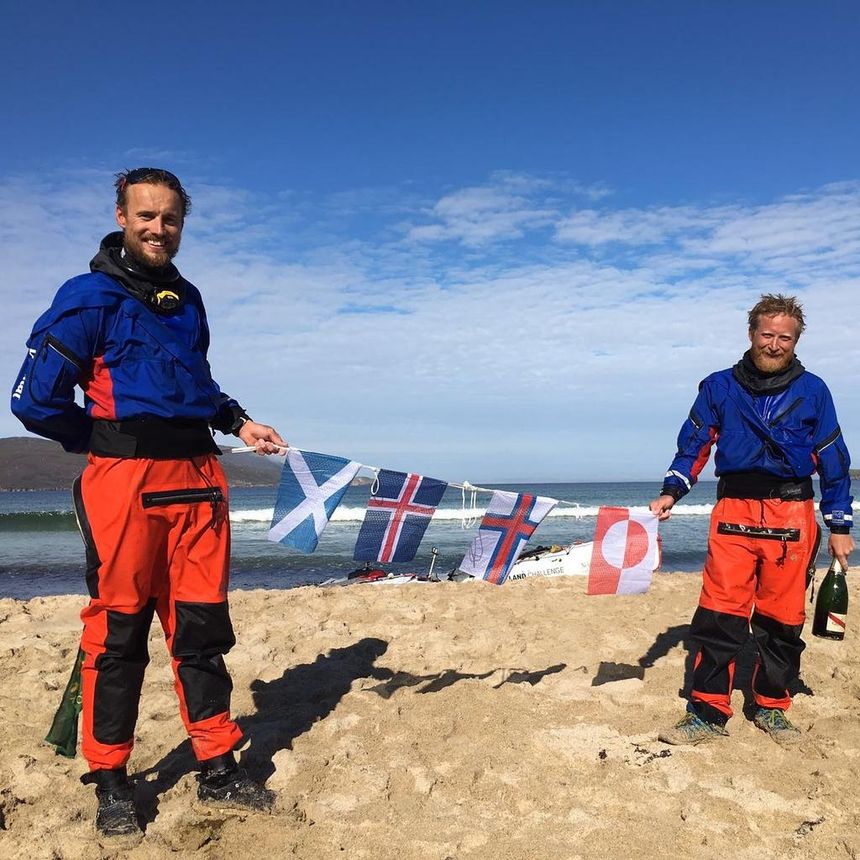 Our fingers are crossed for a weather window this weekend, all the latest on our blog, https://t.co/sWHiWkplxO

Our client and his mate @george_bullard are as bonkers as they are brave. Keep going boys! Nearly there! https://t.co/kquTf4zAYb