On my flight back from Hong Kong recently, I watched the very gripping 'Eye in the Sky' movie.

This film is a surprisingly cerebral look at the future of war and some of the dilemmas of decision-making. It reminded me of the decision-making and behaviour simulation exercises we run for clients.

The enemy is Islamic terrorists hiding in plain sight in a compound in East Africa. The 'Eye in the Sky' is an unmanned drone aircraft flying at 25,000ft waiting ready to fire its Hellfire missiles into them.

The director of the film has not taken sides but has shown some of the difficult decisions that leaders are expected to make into today's pressured, political and fast changing world. This film adds to that cocktail with all the moral and ethical dilemmas of future warfare.

The whole film is an extended version of the Trolley Problem. The basic setup of the Trolley Problem is a runaway trolley careering down a track. There are five people tied to the track. They are sure to die unless you throw a lever and direct the trolley onto a siding. However, here is the ethical kicker, this will kill one person tied to the track in the siding. What do you do?

One variant removes the siding and replaces it with a fat man, standing next to you on a bridge over the track. You can push the fat man off the bridge and thereby stop the trolley. Do you push him off or not?

The film plays with this problem, changing the setting several times and testing our response as well as the characters playing MI6 agents, military and politicians to these changes.

In the film Eye in the Sky, the characters struggle to make ethical decisions with technology that is increasingly autonomous. Taking a line out of the movie, 'the decision making does not reduce itself to simply adding up numbers'.

There are many, often conflicting dimensions: ethical, legal, military, and political added to which the clocking is ticking. It makes for tense watching and real concern for the little girl!

If you have not seen the film, I would urge you to watch it. Although 'fictional' in some sense, it is fascinating watching tense critical decision-making play out. The question is whether the leaders and pilot in the film made the right decision or not. 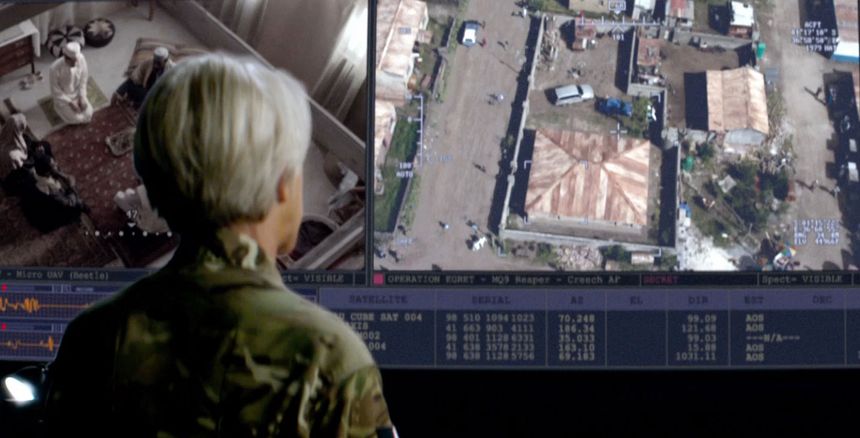