After Emirates Team New Zealand stunned the opposition in the 35th America’s Cup staged in Bermuda, with a comprehensive demolition of Oracle Team USA, I wanted to discuss factors that I believe had the greatest influence on performance.

Campaign Investment Decisions – Where to spend and what to prioritise?

A winning America’s Cup campaign starts with a series of high-level decisions that will ultimately determine the success of the campaign. Namely the operating budget and how this will be financed; how to prioritise resources (knowledge, time, money); the quality of the knowledge and skill you acquire. It is possible to win the America’s Cup on the first attempt, but to do so you will require equal or greater resources than the defender, and most importantly, you will need to acquire intellectual property that will shortcut your programme timeline.

In 2003, the Swiss team Alinghi proved a syndicate could win first time and did so through the acquisition of key personnel from the holder’s Team – Team New Zealand. The intellectual property of those key personnel enabled the Alinghi campaign programme to refine proven design concepts and skills rather than reinventing them. Many other very well-funded campaigns have made the mistake of acquiring highly regarded but ‘naïve’ experts from aerospace and motorsport to lead their design team. Such choices rarely pay off.

As I sit writing this article, I reflect on Sir Ben Ainslie outlining how errors were made in his campaign and how he will need to make key personnel changes for BAR to win the 36th Cup next time.

This is my personal view, but I believe leaning heavily on F1 expertise was a mistake. This decision took them down a programme that focused all resources on modelling and simulation, at the cost of time on the water. The problem with models and simulators is that they must correlate with ‘realtime’ data. Get your model wrong, and the output will be wrong (as Red Bull F1 demonstrated with their ‘correlation problems’.

Key lessons – Red Bull won in F1 because of the acquisition of Adrian Newey. Alinghi won the America’s Cup through recruiting Russell Coutts. In both cases, rapid success was achieved through the CURRENCY and RELEVANCE of the knowledge acquired.

In an age of super refinement and marginal gains, it was refreshing to see Team NZ continued to generate a competitive advantage through innovation. From my perspective, the most interesting area of this 35th Cup was the failure of the media and potentially other teams to realise the true performance benefit of pedal power.

The secondary impact is the reduced aerodynamics drag, which can be gained through reducing the frontal area presented to the wind by having everyone in line. Team NZ believed this was a gain, as they kept the helmsman and wing trimmer behind the fairing and low in the boat. There was more focus on reducing crew drag than any other team.

Both Power and reduced Drag delivered an advantage to Team NZ, but in my mind, the greatest gain was in freeing up the sailors to make decisions and control other systems on the boat. The configuration chosen by Team NZ enabled Blair Tuke, the Foil Trimmer to maintain effort while continually reviewing key performance data shown on the screen. This lower work rate prevents sensory shut down and as a result enabled his tactical communication with the rest of the crew to remain constant event in periods of peak load.

Key lesson:  We can learn a lot from Team NZ. It is easy to become seduced by Marginal Gains, but the Silver Fern consistently delivered highly innovative solutions that demonstrated an ability to think differently about the performance problem. Capacity to innovate starts with a culture that enables people to experiment and challenge excepted norms.

I am a big advocate of the philosophy of ‘World Class Basics’. By executing the basics better than your opposition as it generates competitive advantage. It is interesting to note how the All Blacks and Team NZ seem to have the same foundation for performance.

In this America’s Cup, two teams did a great job in focusing on the basics better by doing two things:

In the case of Groupama Team France, they knew they had a limited budget, so they kept their programme simple by building one less boat and by putting the race boat on the water as early as possible. It looked like they simplified systems so that the boat was easier to sail and that enabled them to cause some shock upsets on the water. Groupama did the basics well and capitalised on errors made by better-funded teams who seemed unable to dial in the potential of their platform.

In the case of Team NZ, it looked like their whole design philosophy was to develop a stable platform that would self-regulate allowing for more consisted foiling across a wide range of conditions. They also decided to stay in NZ for as long as possible, working on sailing their boat to its potential.

Key lessons:  Doing the basis better remains one of the most effective ways of maximising performance. Where the environment is unstable, choose ‘usability’ with a larger performance window over ‘super refinement’.

The Art of Communication

Anyone watching the Cup will have identified significant differences in how decision-makers communicate. For me the most interesting aspect was the choice of all teams, with the exception of Team NZ and Softbank Team Japan, to have their Tactician on a grinding pedestal. Heart Rate data clearly shows the effort, Tom Slingsby, Ian Percy and Giles Scott were required to put in, at the same time as processing information and communicating to their Helmsman.

Sensory Shut Down when under stress (in this case physical stress) dramatically reduces the quality of decision making, and I have observed frequent errors that could have been avoided if the decision-maker was able to focus on making the right call at the right time.

The other point I would like to highlight is the frequency of communications such as on Sweden’s Artemis and the risk of putting noise into the system through too much input from too many people. I listened to a lot of ‘monitoring’ statements on board their boat and less planning statements.

Key lessons – When it comes to effective communication – less is more. By categorising communications, it is possible to audit and refine it by eliminating noise and targeting input on relevant information. Functioning under high physical load will impair decision-making through sensory shut-down. Stress should be managed during decision points.

In Summary – what can be taken from the 35th Cup and applied to other disciplines in Elite Sport and Business?

If any of the above resonates with you, your organisation or team, do not hesitate to contact Peak Dynamics and we would be delighted to help. 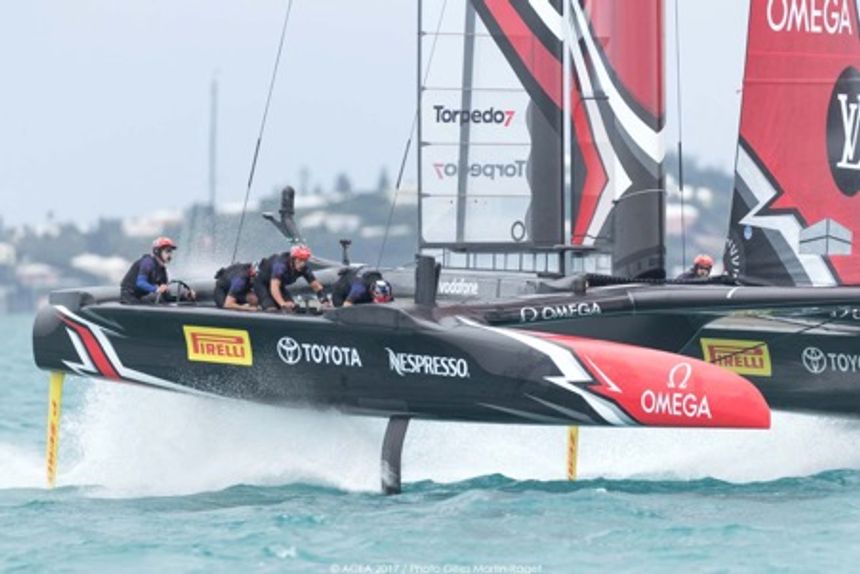