As the coronavirus (COVID-19) has impacted all corners of the world, many us have had to adapt to a new lifestyle.

The lockdown restricted us in many ways, but also has made some of us more time-rich (but sadly many monetarily poorer). It has given us a time to pause, to look at our lives, reassess our place in the world, look at our bodies and how we want to move forward after lockdown.

How many of you have gravitated into one of these three camps - the Hunks (it rhymes - apologies for a slightly male testosterone fuelled title, but you get my point), Chunks or Drunks?  It takes up to 6 weeks to break a habit but just as long to make one, depending how often you repeat it.

So lets look at what has changed, as we established new wellness habits so we might consciously choose to take them, or not, into the new world post-lockdown.

According to recent research:

Interestingly, a lot of people were taking their temperature multiple times a day in the early weeks of lockdown, but none registered any higher temperatures.

Despite the constrictions of lockdown, the data shows that we have all been finding different ways of staying fit. The Australians have switched from swimming to running and with the warmer weather in the northern hemisphere, we have been all heading out on walks.

As the lockdown started to be enforced across the world, so our daily 'step' count started to decrease.

(A fixed data scale has been used on the map below, so results will be magnified for countries with smaller populations.) 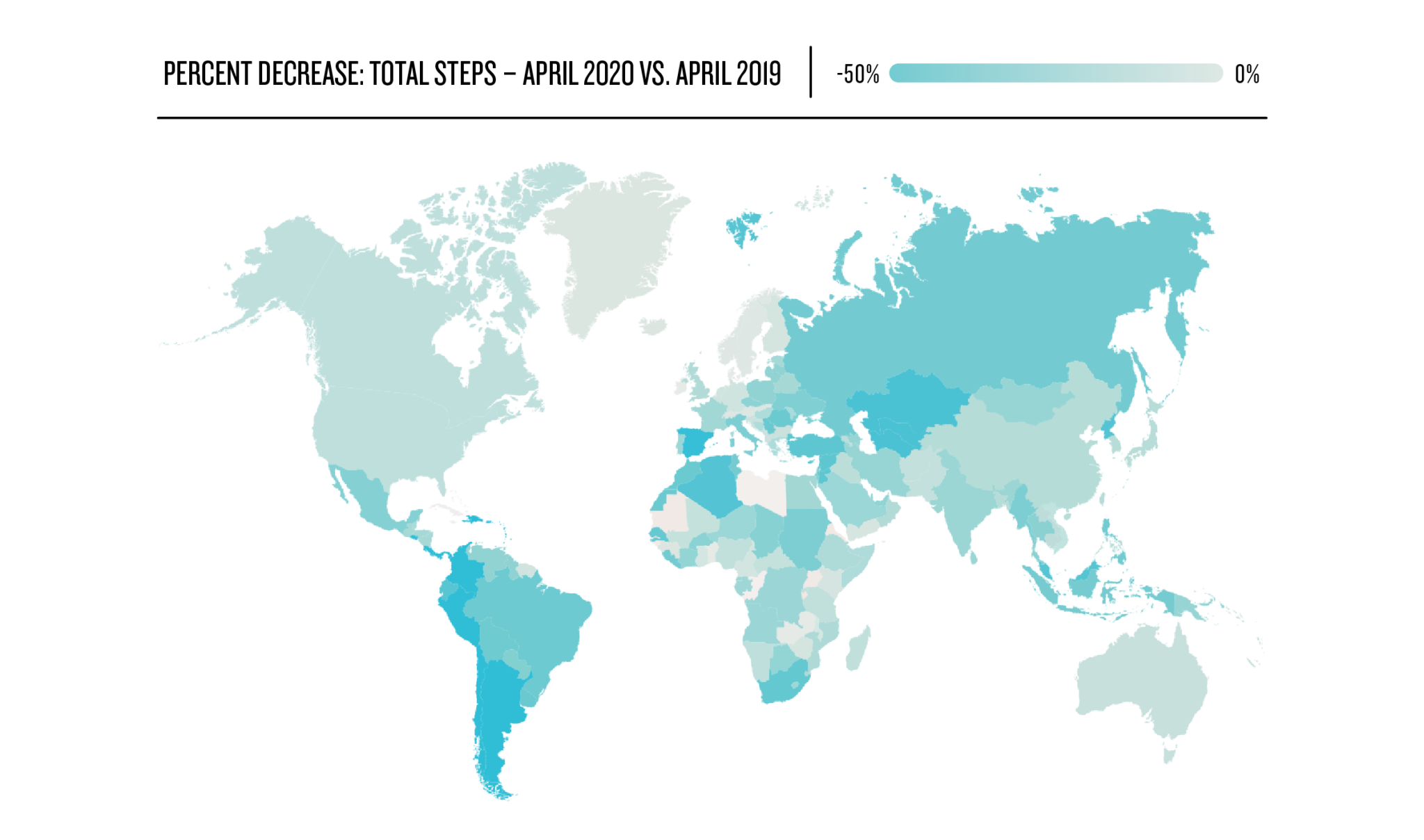 As the harsh lockdown in China bit, so those in Hubei saw their daily steps fall by 56%, and across the rest of China down by 26%. This reduction in steps resulted in the Chinese putting on the most weight.

Biggest fall in 'Steps' per day

Interestingly the Germans increased their steps by 1% and seemed to suffer least from Coronavirus. Also, while the US went into lockdown a few states saw double-digit increases in their daily 'Steps'.

Which activity type has increased during the lockdown?

As the gyms closed across the States, so there were big decreases in gym activities such as Treadmill running and Classes. Instead, there was an increase in Outdoor running and cycling.

For those locked indoors

For those locked indoors, they hit the fitness equipment and instead of focusing on strength as in 2019, the Chinese, Mexicans and South Africans, in particular, hit the cardio. No signs of Hunks are expected then!

In Europe, where the lockdown was most severe, the French, Italians and Spanish, headed onto their fitness equipment. See the chart below.

The Cycling lycra is still being used

Meanwhile, the MAMILs (Middle-Aged Man and Matron in Lyrca) in those countries with the strict lockdowns seemed to have used this opportunity to test themselves on their brand new 'Peloton bikes' and turbo trainers using third-party platforms such as Zwift to ride together. See chart below.

With little to no work being done, the Spanish 'mamils' seemed to spend all day on their bikes looking at the percentage increase of the average distance per ride.  See the chart below.

Do we see a newfound motivation to “beat” the impositions of the pandemic?

The spike in Sweden on 1 March 2020 seemed to correlate with the cancelled famous Vasaloppet cross-country ski race in which thousands take part every year. It looks like many took to the indoor cycling instead, as a proxy for participating in the race.

For those not on their indoor bike turbo trainer, treadmill running increased in popularity for the Italians and Spanish. It looks as if the French and Germans enthusiasm for pounding the treadmill indoors waned over time. The Germans headed outside instead. 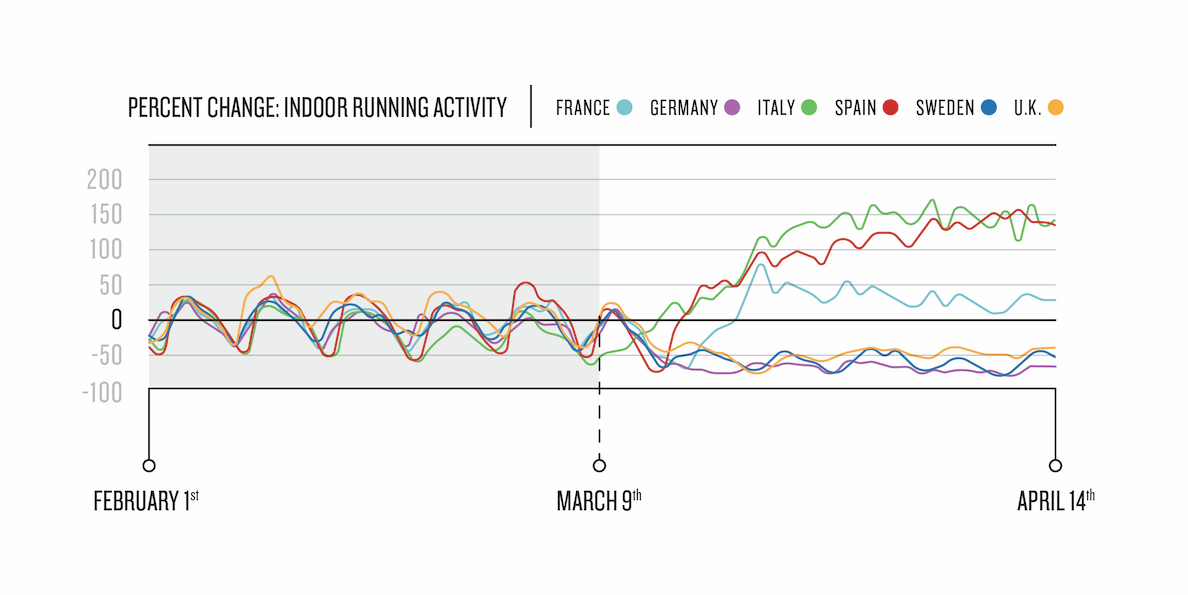 Italians, Spaniards and the French uploaded running activities in record numbers, with respective country increases of 130%, 84% and 18%.

Mountains of Stair to climb

For those in tall apartment blocks and maybe fearful of catching the lift, resulted in a lot stair climbing. I reckon the Spanish and Italians are regretting buying their apartment on the top floor and having to be lockdown in it. Quite curious what happened with the Spanish. Maybe the decline in the redline is their exodus from Madrid to the coast?

According to research, as the gyms closed, the Germans and Americans started to rush outdoors into the fresh air to cycle, mountain biking, run and hike, as the lockdown and fairer weather set in. 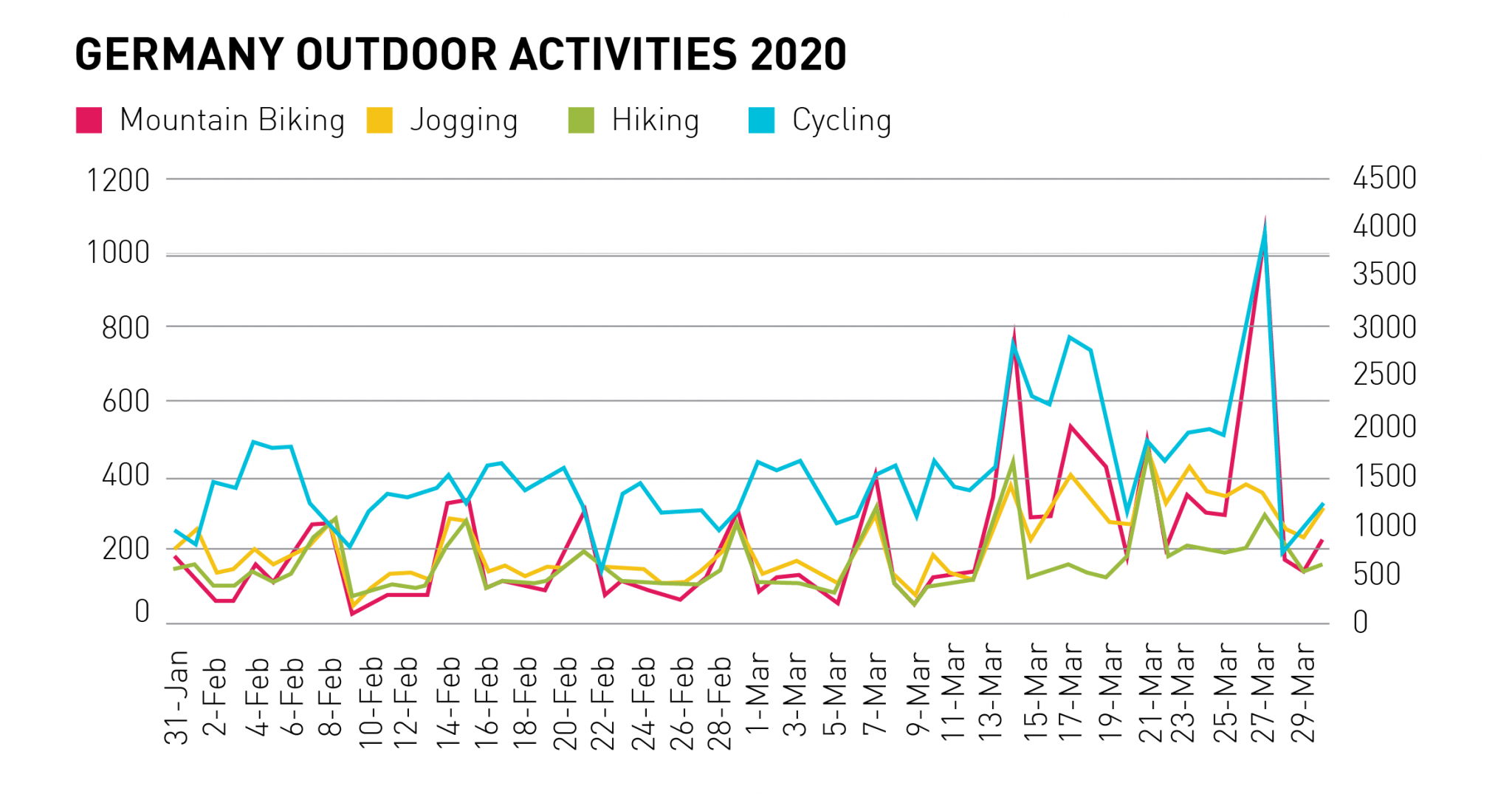 Watch out for the Swedes and their golf

As the Swedish government adopted the controversial 'herd immunity' policy, the Swedes took this less restrictive strategy to head onto the golf course. I am told that in Northern Sweden it was the latest spring since 1951, but this did not stop the Swedes. There was a staggering 741% increase in golf activity.

And what about running? It’s the most popular and typically shared springtime activity. In Spain and Italy, where countrywide lockdowns were most extreme, outdoor running dropped significantly with respective decreases of 68% and 42%.

In every country, those who were running outside were running shorter distances, either because of the lockdown conditions or the cancellation of the spring marathon season in the Northern Hemisphere.

After all that exercise, then you would imagine that everybody was exhausted and needed to sleep. What have people been doing during the lockdown?

The Germans have been sleeping!

The Americans, who are notorious early to bed and early risers went to better slightly later, sleeping 12 mins longer, and waking up 26 minutes later. The French chose to sleep 20 mins longer and gained the least weight. The beneficial effect of sleep on weight is well known.

Your heart has been beating slower

An elevated or abnormal sleep heart rate could be caused by several short-term factors, including the use of tobacco or alcohol before bed. Other causes may include stress, vigorous exercise before bed, room temperature, or illness. Elevated sleep heart rate is particularly prevalent during weekends when alcohol consumption is most common.

During the lockdown, people have had fewer sleep heart rate anomalies or irregularities, especially on the weekend. You can see the spikes of my heart rate in this chart, if you never knew that your heart had a few spikes in the night.

Here are the stats for heart rate anomalies for the weekend and week respectively:

We have not become Chunks

Contrary to popular belief and despite there being no flour in the shops and endless stories of sourdough baking, people have not been piling on the weight during the lockdown (or at least those using various fitness and health apps).

Maybe the 'stay at home' has lead to healthier home cooking. In the UK, we became Dairy obsessed, along with some fruit and veg bought as well. You might wonder what we were eating before the lockdown. Hopefully, we are starting to fight obesity, which has proved to be so fatal with this virus. 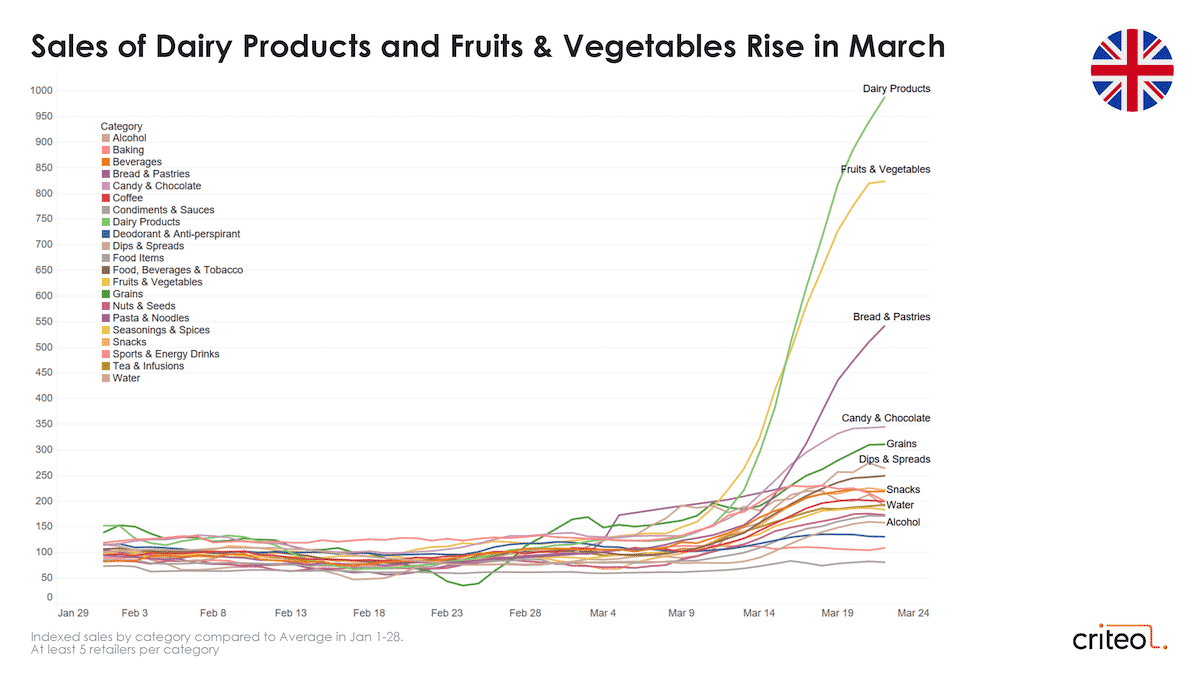 While South Africa and Greenland have banned alcohol sales during the lockdown, this has not stopped others shipping in the alcohol.

In the UK, according to official statistics, alcohol-stores saw a surge of 31% in sales and the Americans have not done too badly either. 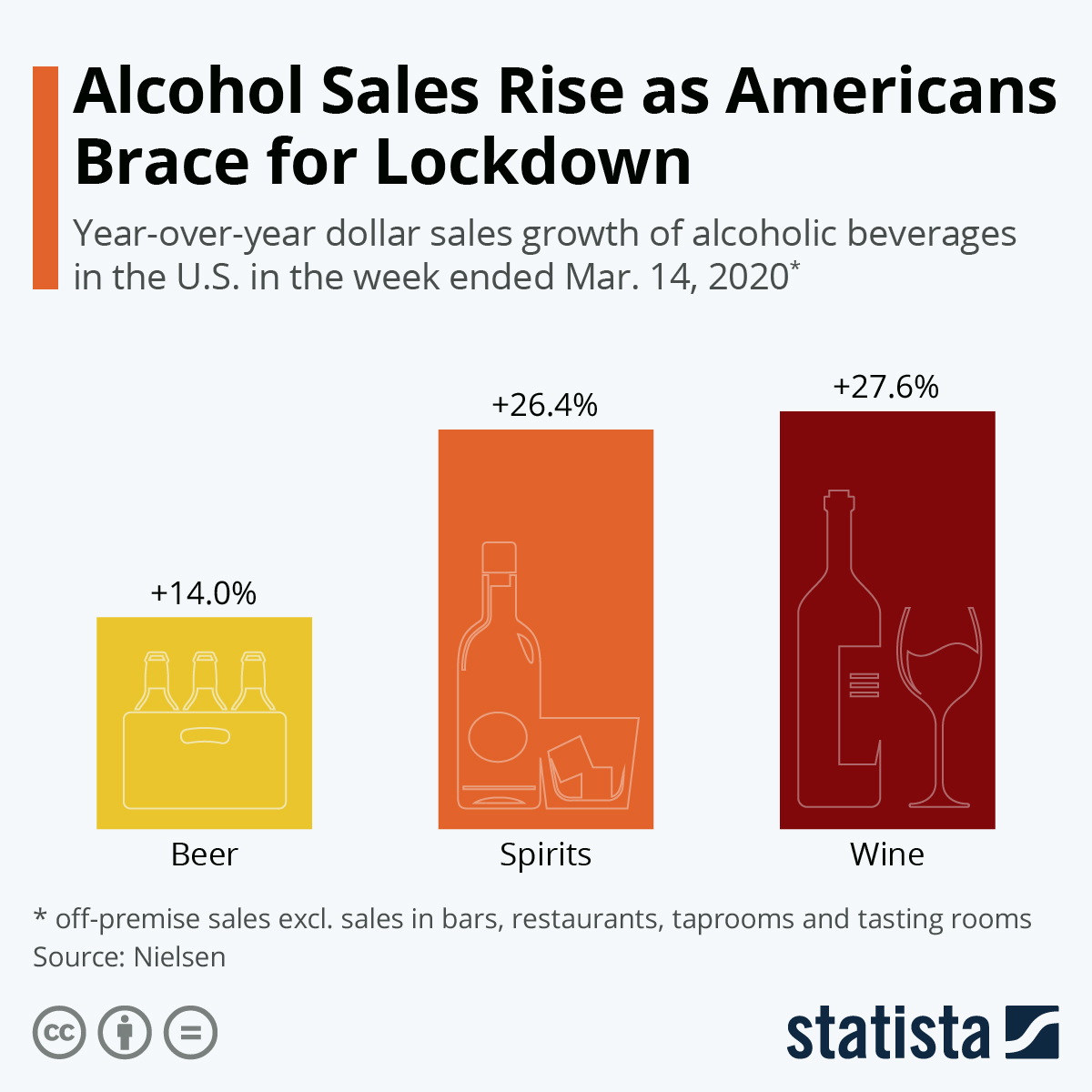 There is definitely a human trait to “beat yesterday".

So, with all those people who have and use a fitness app, we can see the extraordinary lengths people have gone to, during lockdown to stay fit and healthy. I suspect and hope, due to the length of the quarantine, some people's habits and behaviours will have changed for ever and for the better.

If you are interested in buying a fitness watch, here are links to some suggestions: 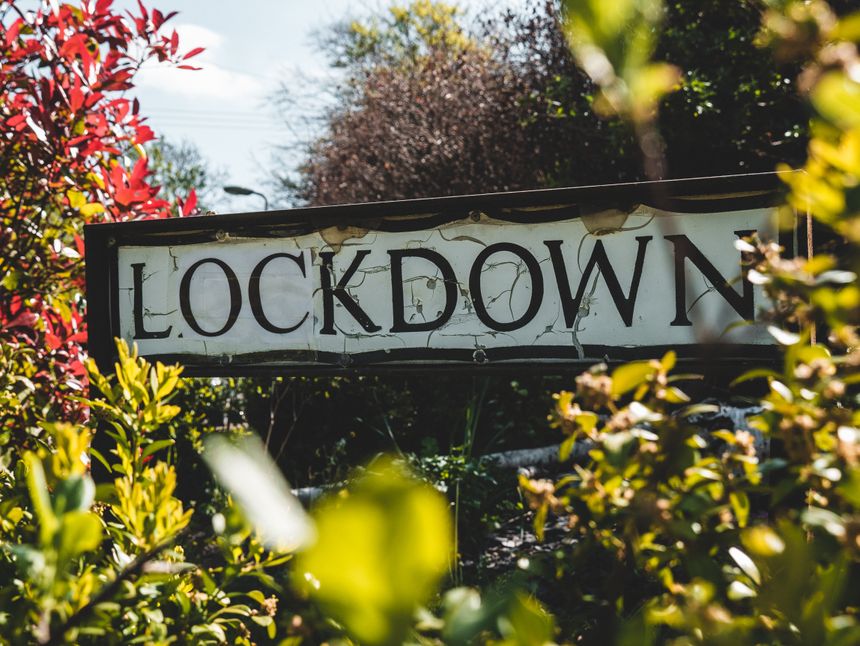 What Makes You Happy?
Sandy Loder