The Tour de France is arguably one of the most brutal sporting events in the world. There are 21 stages, over two massive mountain ranges, covering more than 3,500kms, with only two rest days (during which they will do a two-hour cycle). These world-class athletes are expected to perform at their peak consistently for the duration of this three-week race. Not only that, they are now expected to compete week in week out throughout the year, as the popularity of cycling grows.

So what can we learn from the pro cyclists on the Tour de France and apply it in the corporate world?

We have listed below what we think are six of the most important attributes:

1. Teamwork. The Tour de France is an example of how cooperation and collaboration are so vital. It does not matter how good an individual cyclist is; the race simply cannot be won alone. Each team in the Tour has up to 25 cyclists and support crew, with every person taking on a vital role. Although the lead cyclist is the one that the team want on the podium, it is the team as a whole that wins the race. Victory can only happen with the continuous support of every member in the preparation for, during and after each stage. Everyone in the team plays a vital role, which is the same in successful businesses. For sustained success, you need all members of your section, division, department or business to work together for a common goal or objective. This success is achieved by recognition and appreciation of the efforts of all members to maintain their continued support to create success.

2. Resilience. Over the 23 days of the Tour, there are only two rest days. This means that the athletes are expected to perform at continuously high levels with very little recovery time. Such is the popularity of cycling now that these pros barely have an off-season. Their race calendar is now almost 365 days a year. This constant demand on pro cyclists to perform at their peak is similar to those in the corporate world. With long hours, in high-pressure environments, sustaining top results requires physical and emotional strength, as well as a sharp intellect. It is the ability to deal with adversity and bounce back that is important. A good example of bouncing back or adversity was in the current 2016 Tour, where Chris Froome, the leader crashed along with two others into the back of a TV motorbike. Such was the severity of the crash and the broken state of his bike, that he took the decision to dust himself off and then start to run up the hill (without his broken bike), then jump on a neutral bike that did not fit him, before eventually swapping to his reserve bike. With the surge of adrenaline and probably a healthy dose of the stress hormone, cortisol, we saw a good example of an elite athlete dealing with an unexpected and potentially disastrous situation. It is this resilience to adversity that makes world-class athletes and top business people excel. You need to be resilient to succeed.

3. Passion. Passion is one of the best internal motivators we have. When you love what you do, there is an increased desire to work hard and perform to your best. For the cyclists, it is their love of the sport that sparks that determination and will to achieve, every day, however tough, in whatever weather conditions and whatever their physical state. Have passion and be positive.

5. Decision-Making. We are always making decisions, every minute of every day, some bigger than others. In the Tour de France, decision-making is paramount to success, and is often very binary. Each decision the team and individual pro makes can have a huge impact, that can ultimately result in the race being won or lost. Despite the ever increasing exhaustion during the Tour, the pros will have to make vital decisions within the peloton. For instance, do they chase down a breakaway or let it go and conserve their energy in their legs for later in the stage race or for another day. Sometimes they will only have ‘one bite at the cherry’ and they have to get it right. The teams meet every day during the Tour, both before and after the race to preview and review the day's plan and performance, to make critical decisions about their strategies – as the weather changes, injuries develop or the other competitors get stronger or weaker. The ability to make the right decisions, whatever the situation, is the key to success.

6. Wellness and Coping. The pros taking part in the Tour must try and stay at their physical and mental peak if they are to perform to their best. Recovery, wellness and coping are paramount to success. Recovery from exhaustion, fatigue and tiredness is key to being a winner. Learning to recover during the race stage, or during the working day is essential. You have to be ready for the next attack or the next business meeting. This comes from looking after yourself, exercising, taking on lots of fluid, especially water, eating healthy food and getting enough sleep every night. If not, you start to see stress creeping in. From all our data that we have gathered from our assessments, stress is the biggest blind spot to good decision-making. Stress is linked to resilience and resilience is linked to diet, especially cholesterol. If you look after yourself, you will be able to deliver consistently high performances in the workplace.

Many lessons can be learnt from this sport, especially as it is so binary – the margin between winning or losing is sometimes just seconds even after three weeks of hard racing. The Tour de France race is an extraordinary feat of human endurance, grit, resilience, sweat, toil, passion, sacrifice, courage and excitement. These are all key essentials for success in whatever we are striving to achieve in our lives. Very rarely does success come without these, however talented you might be. 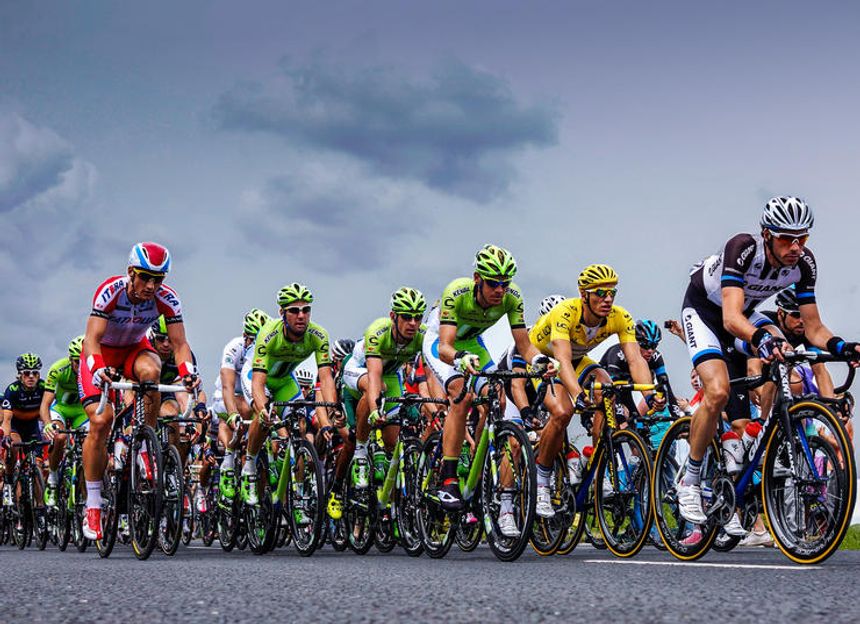